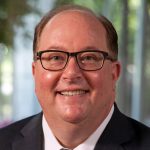 Richard “Rich” Moras is an elected official for the Village of Libertyville, where he serves as Trustee and chairman of the Finance Committee. Mr. Moras had a strong record of accomplishment in corporate business management before changing careers when his son was diagnosed with Crohn’s Disease more than 10 years ago. He has served as both Treasurer and President for the Illinois chapter of the Crohn’s and Colitis Association of America as well as an Advisory Board member for the University of North Carolina’s Keenan-Flagler Business School. Mr. Moras was an Illinois State Scholar and James Scholar at the University of Illinois, where he graduated with a B.S. in Chemical Engineering.  He received his MBA with Beta Gamma Sigma Honors from the University of North Carolina’s Keenan-Flagler Business School, where he focused on strategy and economics.